Riding the Storm at Sea

A November Crossing in the Treacherous North Atlantic

Like all young men the possibility of adventure has a stronger pull than fear even on a pitching ship. The two lads exited the passenger deck through the aft-facing bulkhead hatch to the exposed passageway that ran around the superstructure above the forward deck and just below the bridge. Crouching down behind the solid steel railing which was about four feet high, they worked their way slowly around to a position just about center ship. Only then, with their hands clutching firmly to the top of the railing and bracing against the gale and pitching of the ship, did they raise their heads slowly to behold a sight of nature at its most violent. It was night, pitch black except for the dim light stretching weakly outward from the bridge windows above them. This light and the occasional flash of lightning revealed clouds like grey-blue tattered sheets scudding above a black sea impelled by a gale that finds no impediment on the wide ocean. Endless great whitecaps with their tops sliced off by the force of wind appeared out of the gloom above before crashing down on the bow as the ship bucked and rose to meet the challenge, its single screw pushing it slowly forward. Again and again the ship fought its way down one wave to bury its bow into the next. It was being shaken and tossed by the wrath of a major November storm in the mid North Atlantic.

The Captain was quartering the waves to lessen the stress on the keel, resulting in a twenty to thirty degree heel left and right, with the bow repeatedly ploughing downward into troughs after which the ship would rear upward, shaking off the water as the wave passed roaring beneath. The scream of the full-mouthed gale combined with the crushing fury of tons of seawater trying to smash open the cargo hatch on the deck below made talk impossible. When a periodic flash of lightning illuminated the scene the boys would witness the bow punching into another wave, the black water breaking over the front deck and streaming along the side decks to exit via the scuppers. The wind was a continuous howling banshee gale that whipped salt sea spray from the tops of the waves and drove it painfully into every pore of their faces. It felt like endless needles being stuck deep into the skin. It was both exciting and terrifying, like some unimaginable event that forces you to be a witness despite the impulse to flee. Finally the two boys looked at each other, nodding agreement that they should get the hell out of there and back into the cabin.

Five days earlier we had embarked at the port of Montreal, climbing up the gangway amidst the sounds of hoists and winches and men shouting as the longshoremen loaded pallets of cargo into the hold. The SS Rialto was a general cargo ship of some fifteen thousand tons, taking a variety of goods between Atlantic points. It also had accommodation for twelve passengers. On this passage there were seven young people all about twenty, and one man about a decade older. We were headed for Europe and adventure. It was 1964 and the idea of experiencing the continent was taking hold in the imaginations of young baby boomers all over North America. 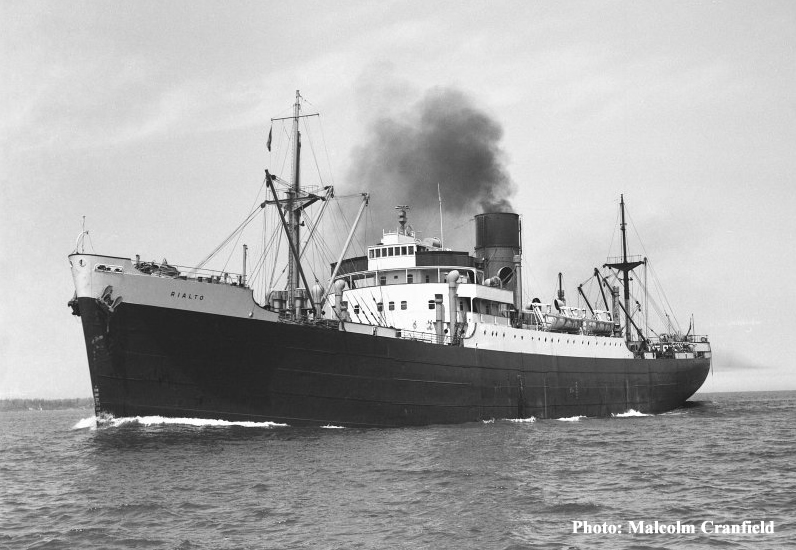 I had taken the Greyhound from Calgary to Montreal via Toronto. Montreal at that time was the most fascinating city in Canada, a place tinged with the feel of Europe and as alluring as a French mistress. Thank goodness for Miss Smith and her immersion French 31. After arriving in Montreal I found a small room overlooking Boulevard Saint Laurent and explored the city, meeting new friends and practically living on steamies, except for the occasional smoked meat sandwich. The best were at Schwartz's Hebrew Delicatessen. You could get the lean or fat sandwich but I always chose the fat which would practically run down your chin when you bit into it. But more adventure beckoned and after a month or two I booked a freighter passage to Britain for some $85. The night before I was to sail, friends took me out to a female impersonator bar, a new experience for me, and then a couple of them escorted me down to the harbour the next morning to see me off. It was a heady time.

The young passengers, five boys and two girls, were planning to travel by bus, rail and thumb in England and Europe. The older passenger was travelling with his large red American convertible car which just fit into the hold among the pallets of apples, flour and other cargo. The car was evidently destined to be a chick magnet on the Continent. The crossing would be a nine-day passage from Montreal to Aberdeen, Scotland. That afternoon we headed downriver from Montreal into the Gulf of St. Lawrence. Then for three days we sailed on calm waters out of the Gulf and up the Strait of Belle Isle between Labrador and Newfoundland. On the fourth day out of Montreal we steamed out into the North Atlantic proper on calm seas. Passengers had the run of the ship. Our activities including spending time out on the deck, amusing ourselves in the passenger lounge, or heading up to the bridge to watch the captain and officers at their duties. The girls spent less time on the bridge - they found that the Captain had a roving eye and hand. Five days out of port the wind freshened and I saw the sailors checking and reinforcing the deck hatches. The wind and seas increased during the afternoon and by dark it was a full-throated storm.

One young fellow passenger liked to whistle. During the storm he started up while on the bridge and the Captain shut him down instantly. "We have enough wind" he snarled. In a serious storm at sea the superstitions come alive as such storms are always dangerous and the Rialto was not a particularly large ship. The storm lasted only a day and night and then there were two days of good weather with large swells. Of course the lad who went out into the storm with me blabbed about our adventure. When one does something dodgy it should always be alone. The Captain reamed us out royally when he found out what we'd done. He, as the English say, put 'a good bit of stick about' swearing that if we'd been washed overboard there would have been no attempt at rescue, just Davy Jones locker for the pair of us.

We always ate with the officers in the dining room and when the movement of the ship became extreme the waiter would soak a thick towel and place it under the white tablecloth so that the dishes would sink in rather than slide around. Soup was off the menu in that circumstance. When the waves abated somewhat I went out to the bow where you could hold on safely and still see down the anchor holes. It was like a carnival ride only higher and more dangerous. One moment the surface of the ocean would be forty feet below you and the next it was gushing up with spray flying past your ears as the bow bit into the next wave.

Larry was the only passenger to become really seasick. He was from Portage La Prairie near Winnipeg so it made some sense that he had trouble getting his sea legs. Even seasoned sailors can frequently get nausea the first few days out to sea. My grandfather William said that, in the late 1800's, the British Navy officers would walk around the deck with umbrellas the first few days out of port as the sailors in the rigging above were not shy about projecting the remains of their breakfast at an officer below.

Oh, and when we disembarked at the Granite City the older passenger found that the intense rocking of the ship had disturbed the bags of flour, causing a cloud of flour dust in the hold that, with the dampness of the sea, left a thin coating over the entire red convertible. Of course the sailors, who likely hadn't covered the car properly with a tarpaulin on purpose, thought this was hilarious. I'm sure the owner of the car got the last laugh.